*ALL deal figures per season 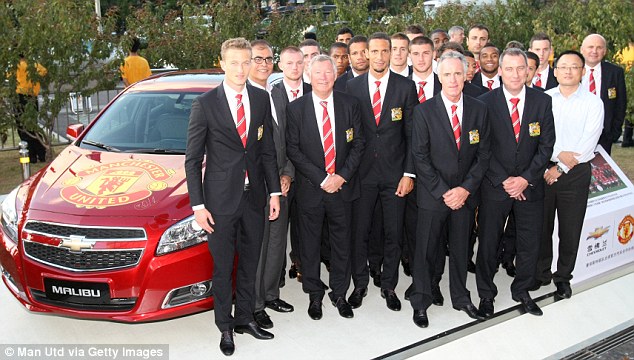 Whopper: Manchester United's squad pose for a picture at a Chevrolet event in Shanghai 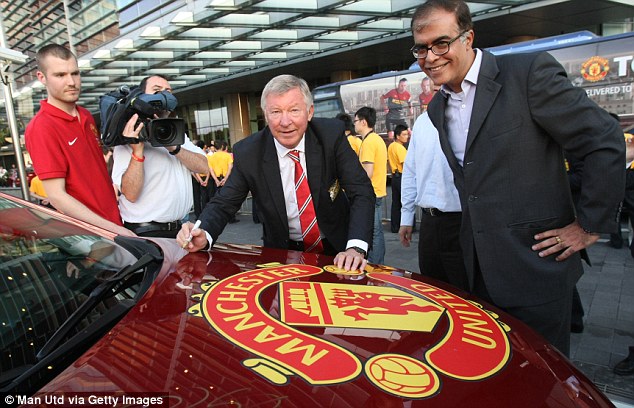 The seven-year contract with US Car firm General Motors will see Chevrolet on United’s shirts from the start of the 2014-15 season.

It is worth an incredible £10m a year more than their current deal with AON.

The announcement was brought forward to boost interest in a stock market flotation of 10 per cent of United by the owning Glazer family in the US.

The £30m-a-year deal eclipses the current highest shirt sponsorship contract of Barcelona’s with The Qatar Foundation, which is worth £25m a year.

United’s deal with AON was worth £20m a year over four years — and the one before that with AIG was worth £14m a year.

United’s commercial director Richard Arnold said: “This is a fantastic, long-term deal for the club.

“We have been partners with Chevrolet for only six weeks, but they have produced some fantastic ideas that will benefit both the partnership and our 659 million followers around the world.”

The deal will help to offset the £500m-plus that has gone out of the club to service the debt incurred by the Glazers when they took over in 2005.

Alan Batey, General Motors’ North America chief said: “We are proud to connect our brand, Chevrolet, with Manchester United and its passionate fans around the world.To be only the fifth name on the iconic red jersey is a genuine honour.”

United manager Alex Ferguson will be hoping the announcement will boost his transfer war chest. He has never complained about the Glazers, although fans have been waiting for a marquee signing this summer.

They are trying to land Arsenal’s Robin van Persie in a £15m deal and Brazilian wonderkid Lucas Moura. The 19-year-old from Sao Paulo will cost £30m.

The Glazer family intend to raise around £200m from their 10 per cent United sale, which was announced last night.